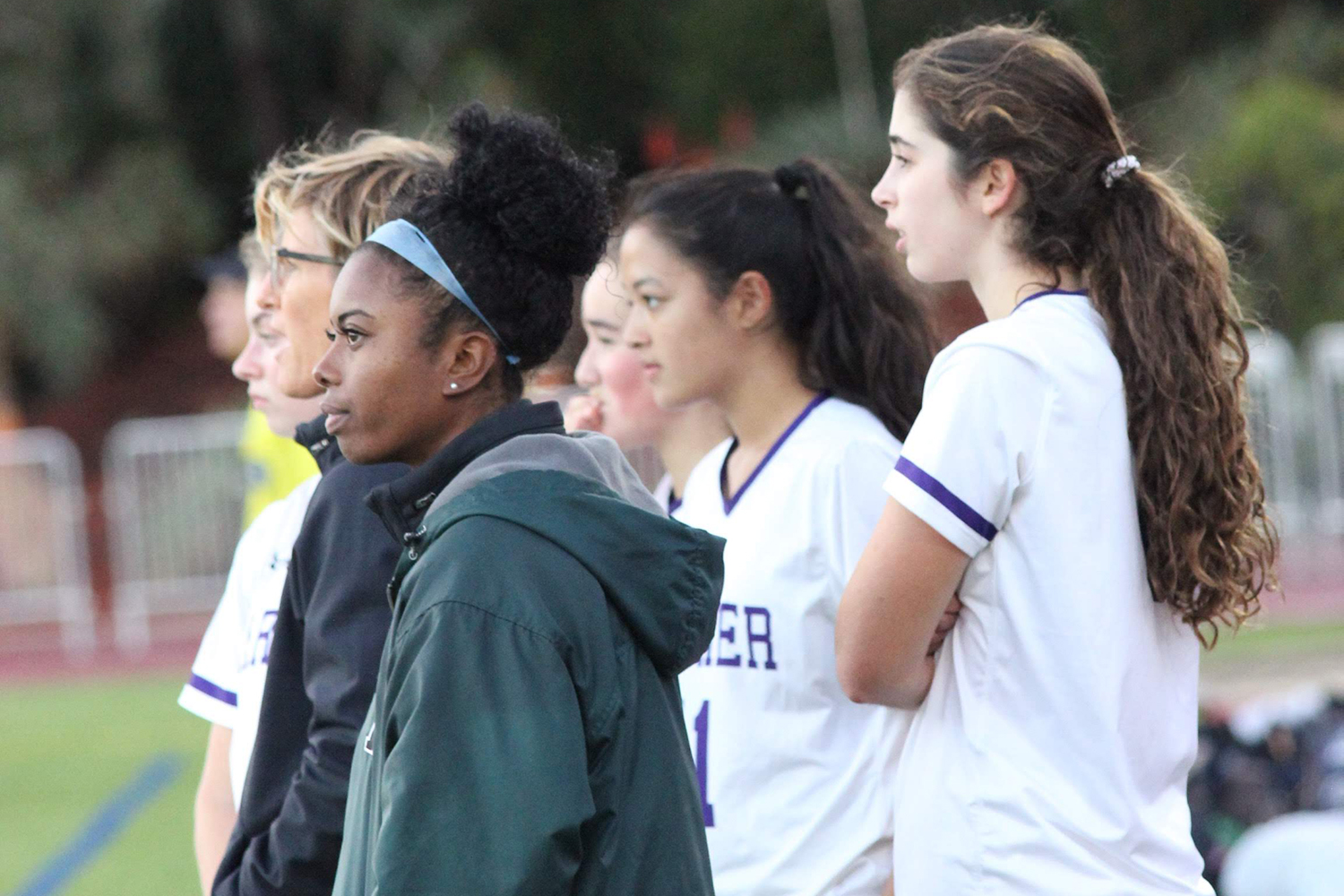 Watching from the sidelines, head soccer coaches Kim Smith and Amelia Mathis observe a varsity soccer game against the Brentwood Eagles on Dec. 6. Smith is currently serving as Acting Athletic Director of the upper school, while Mathis is filling the equivalent postition for the middle school. (Photo credit: Courtesy of Archer Athletics)

Watching from the sidelines, head soccer coaches Kim Smith and Amelia Mathis observe a varsity soccer game against the Brentwood Eagles on Dec. 6. Smith is currently serving as Acting Athletic Director of the upper school, while Mathis is filling the equivalent postition for the middle school.

By Molly Goldberg and Anna Brodsky

In early February, the Archer community received an email communication stating that Athletic Director Denny Lennon was on leave and that a search for a new Athletic Director would commence shortly. The email also revealed that Kim Smith would be serving as the acting Upper School Athletics Director, while Amelia Mathis would be serving as the acting Middle School Athletics Director.

“I was shocked,” junior captain of the varsity soccer team Riley Adams said when she read the email. “This was so unexpected, especially because these faculty members have always been such an integral part of my experience with Archer Athletics.”

Head of School Elizabeth English declined to comment on the reason for Lennon’s leave. When asked what she wanted the community to know, English emphasized his positive contributions to the community.

“Coach Lennon took a program that was in its infancy and turned it into something really spectacular for us,” she said. “He’ll be continuing to work in amateur athletics, and we’re grateful for all that he’s done.”

When Mathis was asked to take on the new role, she said she was “excited” to represent the middle school, particularly because the Middle School Athletics Director hasn’t existed this year. Though last year, Kristen Benjamin had filled the role, Lennon and Athletics Coordinator Marlee Rice, who is also on leave, had been working together to manage middle school athletics.

“They’re doing so well that I want there to be more representation for them,” Mathis said. “Both [upper school and middle school] programs are actually very different and the demand is very different. The middle school [role] is a lot more hands-on in making sure that they know where they’re going, what their games are and communicating with their parents.”

Mathis said that she looks forward to the opportunity to celebrate the small milestones that the young athletes achieve.

“The reason why I’m so intrigued by the middle school is because they’re doing so much of the stuff that [gains them] little victories that we don’t celebrate because we’re waiting for that big championship,” she said. “They win a game, they score a basket, they score a point, they win their race. Those are the small victories that lead up to the big ones, and I just want to be a part of that.”

Smith said that she has found meaning as Acting Upper School Athletic Director by supporting coaches and athletes in the transition to the spring season.

“I see this as an opportunity to really create a paradigm for coaches to follow so that we can fulfill the mission of the school and to serve the students. Because really, all of the coaches, all of us, are here to help the athletes reach their goals,” she said. “I’m just excited to be in this role because I’m passionate about Archer; I’m passionate about the community, the mission.”

Adams has been coached by both Mathis and Smith and expressed confidence in their leadership.

“I’m extremely excited for Coach Mathis and Coach Smith to be undertaking these new roles — I think they’re going to be a great fit,” she said. “Coach Smith is always on top of her organizational skills and is a perfect leader [while Mathis] gives such accurate and inspirational advice [during games].”

A search committee for a permanent director position, headed by Rice Bryan, is incorporating input from student-athletes and parents through information sessions and surveys, English said.

“I think our teams, with their coaches, are continuing to thrive, and I think our program is really going to benefit from a new leader with a new vision who is equally committed to supporting girls in competitive athletics,” she said. “It’s always great to have a fresh perspective and new energy and new talent.”

Mathis said that serving the community as Acting Middle School Athletics director has been a rewarding experience.

“I’ve been in athletics since I was three years old. Being a part of athletics is something that’s been ingrained in my family. Now I’m in a role where it’s all coming together and it’s a time in my life where I feel like I am ready to see athletics in a different way,” Mathis said. “I’ve always been coaching the kids, and now I’m coaching the coaches to coach the kids. It’s a new challenge, and I love challenges.”