Athletes, coaches adjust to remote learning during outbreak of COVID-19

By Lizette Gonzalez and Rio Hundley 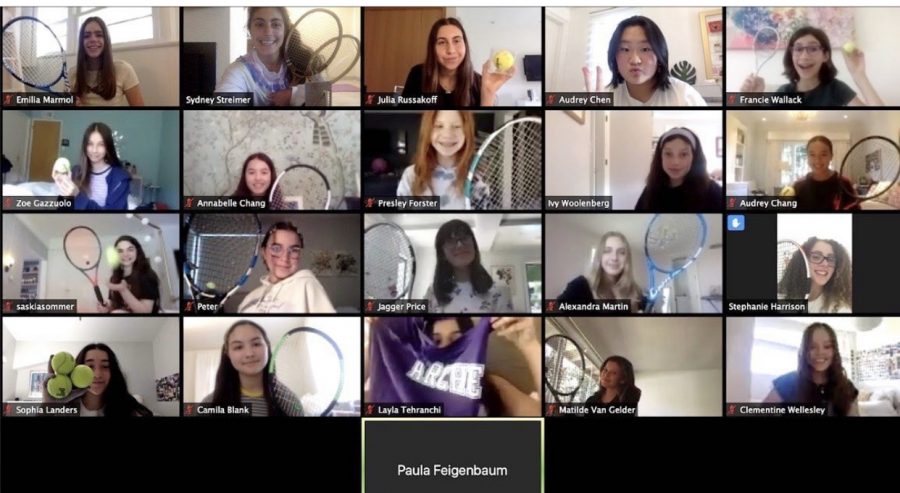 The middle school tennis team adjusts to having practice over Zoom. “Tennis players are staying connected not only to their rackets, but with their teammates and coaches,” Director of Athletics Kim Smith wrote.

Middle school tennis athletes show up to practice with rackets in hand, smiling and ready to work. But this time practices are different: they’re held through Zoom, an online conferencing platform.

Archer athletics made the switch to virtual practices due to the outbreak of COVID-19 and subsequent closure of school grounds.

“It happened so quickly — I went into the office one day and there was one thing canceled, and by the end of the day, everything was canceled,” Director of Athletics Kim Smith said. “What sort of ignited these solutions was the fact that our league canceled all of these competitions and that our school went to remote learning.”

Student-athletes were informed of the cancellation of spring sports practices and league games through email.

“The same time school got canceled, we got an email that practices and all that were canceled,” freshman and beach volleyball player Maya Kakani said. “Our coach [said] ‘If school gets canceled then you can come to [the beach] and practice there’…but they canceled those too.”

In order to help athletes keep up with conditioning during California’s “safer at home” order, Smith posts a daily workout on the Archer Athletics Instagram.

“It engages all the muscle groups that all of our athletes use in their sports,” Smith said. “The workouts I send out might be too intense for someone, so I encourage everyone to reach out for any modifications or questions, so I can tailor it for someone who’s not an Archer athlete who wants to get physical.”

According to Smith, the daily workouts have been embraced by the Archer community, and the Archer Athletics page receives 10 new followers a day. Archer’s athletics department also hosted their first virtual A-Train workout over Zoom on March 24, which had 35 participants.

“We started [March 24], there were [people] from all grades and community at Archer,” head coach of middle school track Alanna Coker said. “It was good — they had a good warmup and a challenging workout and it was just nice to see everybody gathered.”

Individual coaches like Coker have been supplementing Smith’s daily workouts with sport-specific training for their athletes.

“I have been emailing them on a daily basis with workouts…and just asking them to send me feedback on the workout, shoot me a picture or a video of them actually doing it, and for the most part I’ve gotten a really good response from the girls,” upper school track and field coach Ena Leufroy said on March 25.

In addition to missing practices in general, Kakani misses her teammates.

“I miss them a lot; I miss working out and having an actual practice and getting better,” Kakani said. “We’re a really close group and everyone’s really nice, so I miss hanging out with them. I feel like when we walked into a practice we can forget about school and…all the stress or an upcoming test and we would just play volleyball.”

Leufroy echoed this sentiment, and believes that her team is keeping her “on her toes.”

“Track season is my favorite season, and I feel like I’m going a little stir crazy at home, exercising all the time indoors,” Leufroy said. “But if my kids are doing it, I feel like I need to be doing it. I don’t feel like I should ask them to do something I’m not willing to do.”

Smith understands the circumstances that led to this decision are challenging for most athletes.

“I’m the athletic director, but I’m also an athlete,” Smith said. “That physical release and challenge on the daily basis is incredibly important for my practice, and I know …having that deprived is hard for me because I want to be able to provide all these options for them. That’s what really inspired all of these practices that we now have.”

According to Smith, it’s also important to inspire athletes during this time.

“Next week, we are going to have a documentary to watch to inspire them, you know, a heroine a game-changer, a female game changer, that they can learn about,” Smith said.

In addition to inspiring the athletes while at home, Leufroy says her biggest goal is for her track athletes to “be allowed to race.”

“I’ve already spoken to other coaches at some of the other private independent schools about getting a meet together,” Leufroy said on March 25. “And if it’s safe,…approved through Archer Athletics, and they’ve lifted the restriction on the number of people that can come together, we’re going to put on a meet so these kids that have been training through this can show off their hard work, rather than the season just ending.”

Ultimately, Smith wants to do what she can to help athletes through the “great challenge” they are all facing.